Turning the tide: Rocking the boat

KARACHI: The murky waters along the coast of Kakapir, a fishing village, were cleared up when a wave that swept in promised a new horizon of knowledge.

The village, situated near Sandspit, constitutes of a small community of nearly 2,000 people who remained largely uneducated. Taboos and economic factors prevented a sustainable education system, especially among the young.

“Girls in our village cannot leave their houses and boys start assisting their fathers from a very young age to sustain the chain of livelihood” says Ruqiya Mallah, a 50-year-old native of Kakapir. An unexpected chain of events changed the tide.

Out of the blue

Ruqiya, who proudly calls herself a student of Kakapir Adults Literacy, claims that she has been given a  new lease on life as she enters the classroom each day. “I was in the dark before this. Today, I can sign, read the newspaper and text family members,” she says proudly.

She sat gleaming among three other fisherwomen in the last row, fervently taking notes during a lecture. “I like mathematics. When my sons return from fishing, I can easily calculate how much they have earned and what will be the share of other boat crews,” she says, adding how she always asks her teacher to verify her calculations.

And there lies the simple brilliance of the idea.

The programme aims for adult women who are not constrained by taboos or economics but can pass on what they learn to their families. Ruqiya, who is better known in the village as ‘Maasi Ruqiya” is the first person in her family to get education. She isn’t the last however.

Hajra, 55, has managed to fill the empty blanks in her life. Sitting among other students, she was busy drawing a boat. Showing her national identity card, she said, “You can witness my signature. This is mine.” The middle-aged woman had spent her entire life using thumbprints but can now fill sheets of paper with her name. The students of different age group were enrolled in the school comprising one classroom and a courtyard. A majority of them were above the age of 14.

According to students, the sudden change in their life emerged last year when they participated in an educational programme at a nearby school and someone from the community offered adults to learn in a school to be launched in the same village. “A girl from the fisherfolk development organisation came to our house in July 2013 and convinced my husband to get me enrolled,” recalls Rehana. “Since this school is near my house, I got permission easily.”

The catalyst of this change was Ayesha, Ghani Mallah’s daughter. Currently pursuing her graduation from Raunaq-e- Islam Government College for Women in Kharadar, she along with other office bearers run Fisherfolk Development Organisation that is mainly working on education in the village. Her story is that of resilience to finish the work her father started. He had been a force of resistance against the land mafia and someone who was keen on educating his people. But he met an unfortunate end when he was killed.

Explaining the education initiative, ICI Pakistan’s corporate social responsibility coordinator Abdul Ghani recalls the numerous requests they received by the community to financially support their non-functional schools. He was approached by Ghani Mallah who suggested they do away with defunct ghost schools and tap into the private sector. They now have four private teachers and an aptly titled syllabus ‘Jugnu ka Sabaq’. As they teach the students English, Urdu and Mathematics, there is a silver lining just within their reach. 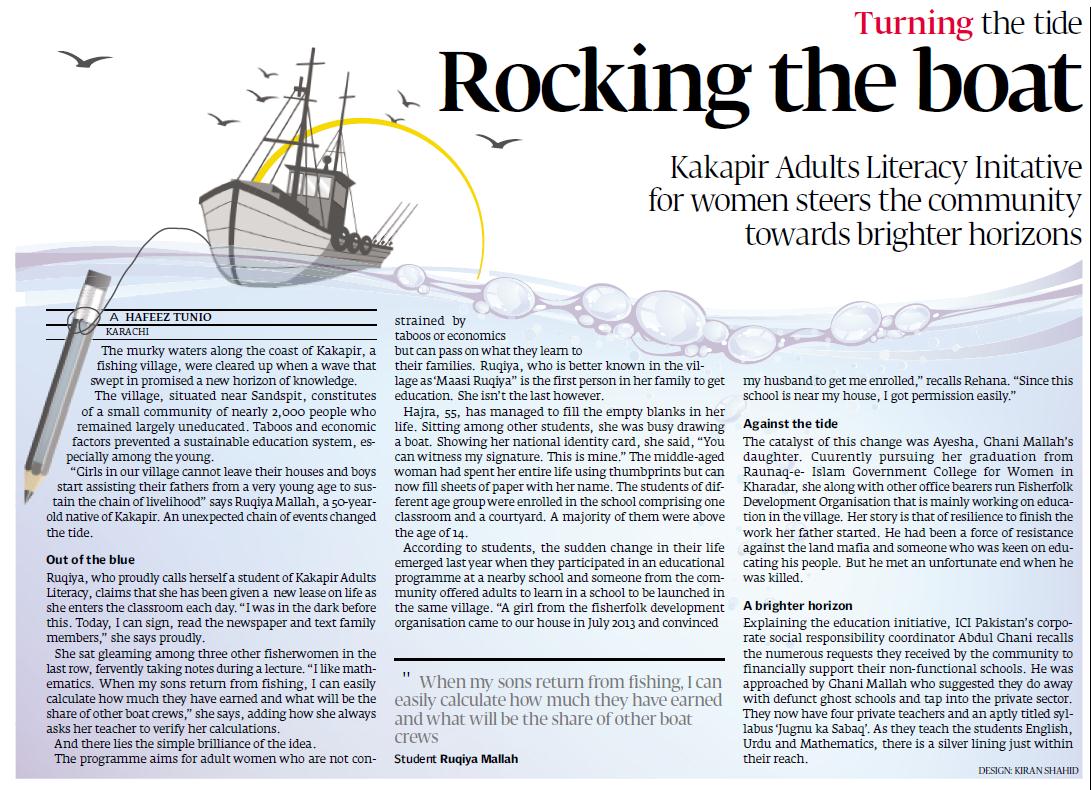 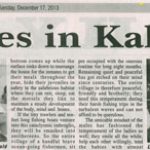